Matthew 14 contains three familiar stories, and each carries with it valuable lessons about God, Jesus, and us. From these stories, we not only discover more about who Jesus was, but also how we can learn and grow through our interactions with and our faith in Him. 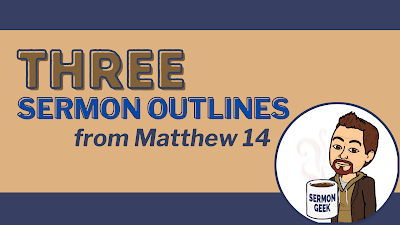 Sermon One: Consider the motivations of Herod

Conclusion: The pursuit of pleasure and the pursuit of popularity will almost never lead to wise or God honoring decisions. While neither of these things are wrong on their own, if they are allowed to govern one’s life, they become the second master that no one can serve if they are seeking to serve God.

Conclusion: We can do more than we imagine with less than we think if we are willing to let Jesus set the agenda.

Conclusion: Life is never a simple straight line. We will always experience ups and downs. There will often be storms to distract and deter us. The key is to keep your eyes on Jesus.