Assumptions and Excuses Will Destroy Your Life

This is one of my favorite proverbs because it paints such a vivid mental image for me. I used to imagine a young man, lying in bed and refusing to get up. His father tells him he needs to get out and get a summer job. Having exhausted every possible argument for why he cannot get out of bed, the son exclaims, "There is a lion in the street!"

Today, the mental image has changed slightly. No longer is the son in bed, now he's in the basement playing video games. And he might be 30. And it might be his mother (or even wife) telling him to get out and find a job.

Sluggard-Lifestyle has become an epidemic in 2019.

DISCLAIMER: Men are not the only creatures who behave like sluggards. Women are also capable (although perhaps not as likely) of finding reasons why they shouldn't do what they know they ought to do.
The foundational truth of this proverb is that the sluggard is supposed to be DOING something. Whether it is going to work, visiting a neighbor, or meeting a friend, he has somewhere he is supposed to go and something he is supposed to do. For some reason, he doesn't want to do it.

"THERE IS A LION OUTSIDE!" 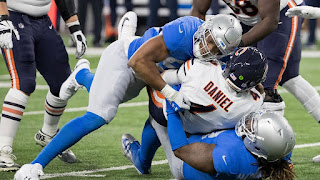 Since the sluggard is likely still inside, he doesn't actually know there is a lion in the street. He's making it up. This morning, I can think of two reasons why he would do this.

1) He assumes it's true. Perhaps he heard a rumor or perhaps he is a person who always assumes the worst. Either way, he has painted a picture in his mind and no one will convince him otherwise. He is now paralyzed with fear because he has assumed his doom is imminent. His assumption has destroyed the life he was created to live.

2) He is making excuses. He knows there is no lion in the street. He simply doesn't want to do what he needs to do. This is perhaps the final in a long line of excuses, "I'm really tired", "Nobody there likes me", "It's boring". Excuses are never helpful and always harmful. His excuses are destroying the life he was created to live.

Today is a great day to follow the advice of Robin Williams in Dead Poet's Society. SEIZE THE DAY.

Do what you were created to do. Take the path you know God has prescribed for you. Grab responsibility and live up to your potential. Fulfill the duties of the roles God has placed you in. Be proactive. Be intentional. Work hard.

Assume the best. Make no excuses.

There is no lion. Get 'r done!