Get Up! (no more excuses)

In 1998, I was a boy's varsity soccer coach. One of my players was only marginally talented, so he rarely started games but he was good enough to get into most games for a few minutes. He probably could have been better, but his work ethic was severely lacking. At least once or twice a week, he would begin complaining about an "injury" as soon as it was time for the team to work on their conditioning (which meant lots of running). He used the "injuries" he had suffered as excuses for his poor performance and lack of hard work.

I finally had to create a new team policy. Anyone who asked to miss all or part of a practice due to injury was not allowed to play in a game until I had written clearance from their doctor. It was a terrible rule, but it became necessary due to the excuses being made by a few players.

We make excuses when we don't want to assume control of our own decisions and actions. 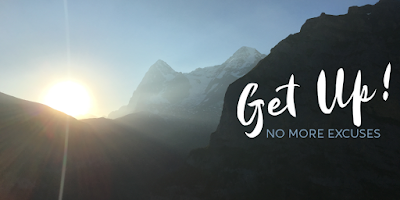 In John 5, Jesus asked a partially-paralyzed man to stop making excuses and assume control of his own decisions and actions. Prior to performing the miracle, Jesus asked him, "Do you want to be healed?"

The man's response is telling. He said, “Sir, I have no one to put me into the pool when the water is stirred up, and while I am going another steps down before me.” Notice what has happened to this man over time:

We all do the same thing all the time. We fill our minds with excuses. We tell ourself stories about why we are not in control and why we don't have the opportunities we need and why everything and everyone is against us.

Eventually, we believe our own excuses and we decide to be passive, to not do what we know we should.

Finally, instead of taking action and being proactive, we make excuses to others, we blame circumstances and explain to those around us why life is so bad for us and why we cannot ever take the next step to move ourselves forward.

Jesus said, "GET UP!" (and He made it possible by healing the man.)

Has Jesus healed you? Has He made you new? Has He promised you an incredible future and an eternal inheritance? Has He asked you to live for Him?

Stop filling your mind with obstacles and start focusing on possibilities.
Stop choosing to be passive and start deciding to take action.
Stop passing blame and start practicing for the future.