Why Is Christianity Different Than Every Other Religion In The World?

Three words in the middle of that verse define the distinction between Christianity and every other religion in the world.
ONCE FOR ALL.
Virtually every world religion shares one fundamental similarity. At the heart of the religion is instruction for achieving “eternal life”, or whatever else might be the ultimate goal of the religion (eg. Nirvana, Heaven, etc.). These instructions always tell you what you need to DO. I think this concept of religion resonates with most people. 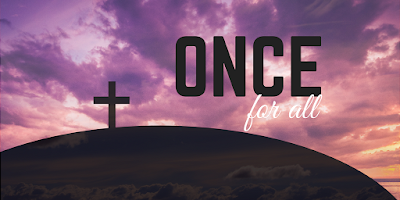 Let me provide a few examples.
Buddhism is built on a process of holding to or believing four noble truths. The fourth of these noble truths instructs Buddhists to follow the eight-fold path, which is a list of eight activities designed to help the Buddhist gain liberation from attachment and suffering. Following the eight-fold path means doing the following:
According to the Buddha, apart from doing these things, one cannot hope to rid himself or herself of attachment or suffering, and has no hope of reaching nirvana.
Islam is a religion which many consider in the same family as Christianity. Muslims find their roots in Abraham’s family tree (albeit their branch is Ishmael, not Jacob). Muslims are monotheistic, a trait they share with Judaism and Christianity (and maybe some “Christian-like” cult groups).
The core of the Islamic ethic is rooted in the Five Pillars of Islam. These five activities are the core of the Muslim’s hope to one day find their way into the heaven of Allah:
(I’ve listed here the Sunni Muslim pillars. Other branches of Islam have slightly different but essentially similar pillars)
As with the Buddhist, performing these duties is essential for the Muslim if he hopes for a “good ending” in the after-life.
Most people assume (understandably so, due to the obvious emphasis of nearly every world religion) that our destiny in the afterlife is directly tied to what we DO in this life. Many people even assume that this is the perspective of Christianity, that our adherence to the rules in the Bible affects our ability to make it into heaven.
This is the misunderstanding which Hebrews 9:26 corrects.
First, let me point out what some might view as the ethical foundation of Christianity. Many people would view the eight-fold path and the five pillars as parallel lists to the ten commandments of Judaism and Christianity, or the three commandments of Jesus in the new testament (Love God, Love your neighbor, Love one another). However, the Bible is CRYSTAL CLEAR that someone who adheres to the ten commandments and/or the three commandments all their life will NOT earn their way into heaven.
The message of Christianity is that no to-do list of good deeds will ever be sufficient to eradicate the sin that separates us from God (if this post wasn’t getting too long already, I’d discuss how our first three years of life and college put us so far behind on the good deed-bad deed ledger that we can never hope to catch up).
Just a reminder:

If you’ll notice in this verse, Jesus does ALL the work. Nothing is left to us. While other Bible verses explicitly discuss our weaknesses, this verse clearly implies our inability to be right with God on our own.
Instead, we rely on the fact that Jesus has already accomplished the necessary work to make us right with God. We only need to rely on His work on our behalf.
His sacrifice was ONCE. It requires no on-going work on our part, it requires no repetition, it requires nothing in the future. It was a one-time historical event that eradicated the penalty of sin for all who believe.
His sacrifice was for ALL. We can understand this to mean that his sacrifice was good for all people of all races, tribes, creeds, etc. We can also understand this to mean that his sacrifice was good for all time, it left nothing undone that needed to be done.
According to the Bible (Hebrews 9:26 particularly), my eternal destiny is completely dependent on ONE past historical event. My ability or inability to follow a list of rules or an ethical code has no impact on my standing with God. phew!
It boils down to this:
Religions require an ongoing process of deeds as the only way to be purified from wrongdoing.
Christianity recognizes one righteous act by God was sufficient to put away sin.
How do you respond to this truth?
How do you respond?
Email Post