Please Pray for My Friend

November 01, 2017
In 1984 the Detroit Tigers won the World Series, the Apple Computer replaced the Macintosh personal computer, Ronald Reagan was re-elected as president and my family moved to Muskegon, Michigan.
The first time we walked through the doors of the new church, a kind lady introduced herself to me and said, "My son is 'David' also. Let me introduce you to him." She walked me to the basement of the church where her son was already in Sunday School class and introduced me to one of my lifelong friends.
Since that moment, I have always been "David" because he has always been "Dave". It's been only been 33 years, but it feels like he's been with me through every part of my life. 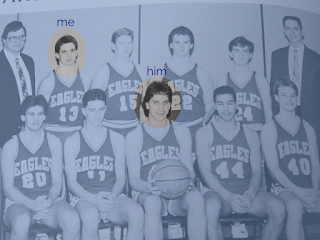 He was my vice president when we ran against Matt and Jack in the mock election. We bunked together with Brian at Lake Ann. We threw marbles down the stairs and spit-wads at the chalkboard in middle school. While I patrolled the midfield throughout high school soccer, he played whichever wing was closest to the crowd side. In basketball, he padded his rebound stats by always missing the first shot (effectively clearing my assist) and making the second.
In college, we won intramural championships together, participated in the Lawlor riots, built a coal mine and a jurassic world in our suite, attended Church of the Inner Spring and when he got a deer under questionable circumstances... well, I know nothing about that.
I watched him beat cancer and then re-find the love of his life. I had the incredible privilege of performing the ceremony uniting him to Amy. I've watched him become an amazing father to his miracle little girl.
Dave is a friend after God's own heart. He is kind and caring to everyone he meets. He is the epitome of loyalty, choosing always to believe the best in me even when he didn't have to and it didn't benefit him.
Tomorrow my friend Dave will go under the doctor's knife.
Every week, I spend a great deal of time reading and praying over the requests of hundreds of my friends. My heart is always moved by what others are dealing with. If it's possible I'm going to be praying harder tomorrow. Will you pray with me for my friend?