You can get out from under that cloud of gloom!

Joel, the prophet, called on the nation of Israel to repent. Chapter two of his writings paints a frightening picture of the impending doom his countrymen faced. He predicted the advance of a powerful attacking army such as had never been seen before. He described those days as dark, cloudy and gloomy.

But he also reminded Israel that their God was still able to save them. “Even at this late hour” he said, “When things look so bad, our God can still save the day.” He reminded his friends that God is gracious, merciful, slow to anger, abounding in steadfast love and One who relents from punishing.

“Even though we don’t deserve it” Joel preached, “God still may rescue us!”

He called the nation to repent. Old people, young people, even babies were to gather and cry out for salvation. This was not time for celebration. Joel told bridegrooms and brides to leave their ceremony and join the congregation in a nationwide appeal to God. “Spare your people, O LORD” they cried out, “Do not let your reputation be mocked. Do not let people say, ‘Where is their God?’” 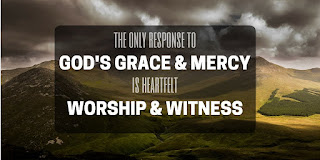 The prayer Joel prescribed for Israel can also be prayed by you. You may not face an advancing hoard of Assyrians, or locusts, or a famine. You may however find yourselves in dark days, living under a cloud of gloom. Perhaps it is time for you to turn back to God, your Father and allow Him to step in and save you.

Use the prayer of Israel as a template of your own repentance.

A TRULY REPENTANT PRAYER IS ABOUT GOD’S GLORY:


“Rend your hearts and not your clothing. Return to the LORD, your God, for he is gracious and merciful, slow to anger, and abounding in steadfast love, and relents from punishing.”
Email Post