10 Lessons On Leadership from John the Baptist 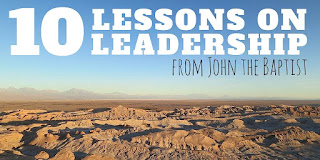 If I were to use one sentence to summarize John the Baptist's leadership style I would say this: John the Baptist was fully committed to building someone else's kingdom instead of his own. When reading Mark's account of the desert prophet, I am struck by the wild popularity of John prior to Jesus' arrival. Yet, even though he could have gained wealth, position, possession and more; John chose instead to lose everything (even his head) in order to point people to Jesus.
Mark doesn't devote a great deal of ink to the story of John, but what he does say is profound. Below are 10 reflections of mine from Mark 1:1-8.
Email Post