About the Syrian Refugees: It's more complicated than you're saying it is


I've watched for the past couple days as the Starbucks cup outrage has been replaced by refugee rage. I'm sure by next week, the outrage will have moved along. Frankly, I'm a little surprised so many people are so focused on the refugee issue this quickly after the Russian plane, Lebanon bombings and Parisian terrorism. The refugee question is really not connected to these occasions of terrorism. (I know it seems like it, but it really isn't)
Anyway, I've been wrestling with this for a couple days and feel like I might as well throw some thoughts out. More than anything else, I hope anyone who reads this can recognize that I'm calling for EVERYONE to think through this a little bit more. There are lots of sides to this issue, and not all of them line up neatly into one concise talking point. 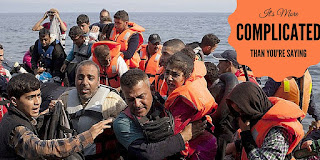 So, here are 8 things I think about the stuff I see going on around me...
Email Post