What would Jesus say to a pedophile?

On Monday, the Salon website ran an editorial entitled:


I'm a pedophile, but I'm not a monster.

What is your initial reaction to this? Then, once you've grabbed your breath, what is your secondary reaction? Any different? More importantly, how do you think Jesus would respond to Todd Nickerson (the author of the story).

I'll be honest. My first thought was, "This isn't real. This is satire. It's a modern rendering of "A Modest Proposal." I even spent time googling the story to figure out if it was a joke. I don't think it is.

So I began trying to process what this means. More specifically, I asked myself the question, "How should Christ's church respond to a person like this? What does it mean for Christians to embrace someone who is sexually attracted to little children? (if you have little children, these questions take on a whole other dimension)"

We ALL have value and worth IN SPITE OF our sin.


Peter denied Christ, swearing a vow that he didn't know him. Still, Jesus commissioned Peter to lead the church IN SPITE OF his sin.

Jonah blatantly disregarded God's command to go to Nineveh. He chose to go the opposite direction. Still, God used Jonah to bring great revival to a massive city IN SPITE OF his sin.

Romans tells us that "while we were still sinners" Christ died for us. He chose to give His life for ours IN SPITE OF our sin.

We must not lose sight of the idea that our faith does not focus on sin. Our faith focuses on salvation. At the same time, we do not gloss over sin; we acknowledge it, confess it, repent of it, and leave it behind. I know it is no longer a popular sentiment, and is often derided as being insensitive, but the truth of "loving the sinner while rejecting the sin" is still true. In fact, this idea lies at the heart of Jesus' ministry. 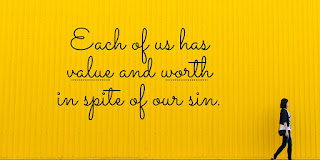 THOSE WHO FOLLOW JESUS ARE CALLED TO LET GO


To the woman caught in adultery Jesus said, "I do not condemn you." And He said, "Go and sin no more."

To the rich young ruler Jesus said, "Follow me." And He said, "Sell your possessions."

To His followers, Jesus said, "Be my disciple." And He said, "Take up your cross."

In His parable about a great party, Jesus told of a master who invited everyone to be His guest. And He demanded they remove their own clothes and wear the new garments He had provided.

Jesus accepts everyone as they are. And Jesus changes everyone to be like him. Therefore, Jesus expects that those who follow him will let go of the things to which they cling most tightly. The apostles echoed this principle in the rest of the New Testament.

Writing to the church in Corinth, Paul instructed the believers to let go of their relationship with a man whose sexual immorality was destroying the purity of the church. Then, once the man had personally let go of the sin that held him back, Paul commanded the church to embrace him.

In Philippians, Christians are instructed to follow the example of Christ who was willing to let go of the status which was rightly His. Jesus' example was provided to illustrate the instruction to let go of our own desires for the good of others.

Following Christ requires us to let go of that which is most precious to us.

I am saddened that many Christians have believed a lie. They have bought the world's teaching that they don't need to let go. They believe they can embrace and cling to their own notions of themselves and still follow Christ. I wonder if this is the mindset of those who will be saved, but as if through the fire.

WHAT WOULD JESUS SAY TO TODD NICKERSON?

And I think Jesus would tell Todd to let go.
Email Post