How Should Christians Respond To The New Rules About Marriage?

July 20, 2015
I wrote this post the day the Supreme Court ruled regarding marriage. I didn't publish it until now because I didn't want to be part of the massive rush of people using the decision as click-bait. Over the coming weeks, I may post more of my thoughts on marriage, the supreme court and the Christian life in America.

You can no longer live with your head in the sand. The Supreme Court has ruled that American marriage can now mean two people of the same gender contracting with one another for life.

As Ayn Rand said, "You can ignore reality, but you cannot ignore the consequences of ignoring reality."

Reality is that marriage, as defined by our government, is no longer what it once was. It is broader and more inclusive than many ever thought it would be. Is this a quantum shift in the life of the church? What does it mean?

My suggestion is that it doesn't matter. You should be informed and you should be aware because this is the culture in which you live. But this decision by the SCOTUS shouldn't change anything about what you do. 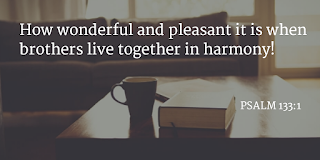 If you performed same-sex marriage ceremonies before, keep performing them. If you didn't, don't start.

If your membership was open to those who were in homosexual marriages, leave it open. If it wasn't , don't open it now.

If your leadership positions were filled by some with gay spouses, allow them to continue. If they weren't, don't fill them now.

I can only assume that any decision your church made regarding gay marriage was made after intense prayer, study of Scripture, and seeking the counsel of many you consider trustworthy. Whatever conclusion you reached is no less valid because of a ruling by the government, regardless of whether that ruling affirmed or contradicted your position.

One of two biblical passages is applicable to you today:

"Let everyone be subject to the governing authorities, for there is no authority except that which God has established. The authorities that exist have been established by God. Consequently, whoever rebels against the authority is rebelling against what God has instituted, and those who do so will bring judgment on themselves. For rulers hold no terror for those who do right, but for those who do wrong. Do you want to be free from fear of the one in authority? Then do what is right and you will be commended. For the one in authority is God’s servant for your good. But if you do wrong, be afraid, for rulers do not bear the sword for no reason. They are God’s servants, agents of wrath to bring punishment on the wrongdoer. Therefore, it is necessary to submit to the authorities, not only because of possible punishment but also as a matter of conscience.

This is also why you pay taxes, for the authorities are God’s servants, who give their full time to governing. Give to everyone what you owe them: If you owe taxes, pay taxes; if revenue, then revenue; if respect, then respect; if honor, then honor."


In Acts 5:29, Peter told the rulers in Jerusalem:

“We must obey God rather than human beings!

Whether you are comfortable submitting to the government's definition of marriage or you are convicted to obey God rather than men; you should be convinced in your own mind that you are remaining faithful to God's Word.

If your position has changed because the government says it should, you never had a biblical position.

If your position has changed because your friends say it should, you never had a biblical position.

Addendum: It's possible that you haven't had these conversations or addressed this issue before. Now you must. But don't reach a conclusion because it's convenient or popular among your parishioners. Do the work, spend time in prayer and find a conviction that you can hold when standing in the presence of the Almighty God (otherwise, it's not much of a conviction is it?)