February 03, 2014
Tomorrow night, Bill Nye the Science Guy will debate Ken Ham (Abraham Lincoln look-a-like) on the merits of Creationism as a scientific pursuit. "Is creation a viable model of origins?" will be the primary proposition of the debate. Tickets to see this event live sold out within an hour, but you can watch the debate live at debatelive.org. The debate is scheduled to begin at 7pm (EST) and I believe MSNBC.com and NBCNews.com will also be carrying the debate live. 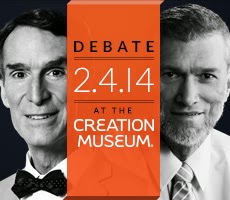 I am fascinated by the scientific community's response to this event. I would have assumed most scientists would relish an opportunity like this. I thought that people who believe they have the facts on their side would be excited to expose the alleged foolishness of Ken Ham's young earth creationism. I was wrong. Generally speaking, the scientific community is opposed to this debate and believes it to be a terrible idea.

Over the weekend, I have read article after article in which respected scientists voice their disapproval of this debate. Some are aggressively on the attack, making statements such as, "This debate is being held at the Creation Museum itself and this will ensure that the brain-dead creationist zombies come out in droves..." or "Creationists have no rules, their dishonesty stops nowhere. Nye will attempt to use proper science and reason to bring down Ham, but Ham will care little for any facts or evidence and will stick to nonsense and will feed on audience ignorance" (source: here). Others are less offensive, and simply argue that this is not a good idea for evolutionary science, "The conventional wisdom among evolutionary biologists is that they have much more to lose than to gain from Tuesday's face-off in Kentucky" (source: here)

The consensus does seem to be that true scientists should not engage in debates about creation, because this is a "settled" issue. Of course, this consensus is only held by those who espouse evolution as the only possible explanation for our universe's origins. These scientists are convinced that anyone who believes creation is a viable explanation of the universe's existence has simply not wrestled long enough with the facts.

This is, of course, the old "The only reason you don't agree with me is because you aren't smart enough to understand my argument" fallacy. It is illogical and arrogant.

I may or may not watch this debate. I am assuming very few people will reconsider their positions after watching it. I also am assuming very few new arguments will surface. I hope I'm wrong. I hope it is a helpful debate which allows people to have a healthy engagement with the issues. I think this could be possible, if each participant is willing to take a different-than-expected approach.

Will Bill Nye acknowledge his presuppositions?

The inauguration of our universe cannot truly be studied using the scientific method. The origin of the universe cannot be reproduced, nor was it observed. Therefore, any theory of origins must include some degree of assumption. Attributing the inception of the universe to "natural processes" requires the  assumption that certain physical processes have remained exactly the same for billions of years, while also assuming that certain biological processes have been randomly altered during the same time frame. Further, these assumed biological mutations cannot be proven as no scientifically verifiable data exists of these events.

Most scientists claim to be unbiased and to assume nothing. The truth is that all scientists, regardless of which side of  the origins debate on which they fall, begin with some assumptions. Their work always reflects those assumptions. Will Bill Nye be willing to acknowledge these assumptions and is he capable of making his argument from the foundation of his assumptions?

Ham is an avowed proponent (as are many capable, intelligent, scientifically-minded Christians), of a literal six day creation. Unfortunately, sometimes his view of a very young earth leads him to over-emphasize the wrong questions in this debate.

Christians are divided as to how Genesis 1-2 should be read. However, this is really an in-house discussion which is less scientific and more hermeneutic and philosophical. Whether Genesis teaches a literal six day creation or whether it is a non-scientific, non-literal poem describing the creative act should be discussed in churches, small groups and over coffee.  One's view of this issue does impact their understanding of sin, of God's sovereignty, of man's nature, and more.

But it's not the debate which Ken Ham should have with Bill Nye.

Ken Ham needs to debate a far simpler question, "Is there a creator?"

More specifically, does the evidence suggest that the universe was more likely set in motion by an intelligent being or random forces?

I hope these men can have a profitable discussion. My guess is that they will not. I imagine they will both hit their talking points, they will further entrench the firmly-held beliefs of their followers, and they will both claim victory. But, perhaps I'll be wrong.