Phil Robertson Can Say What He Wants. And A&E Can Do What They Want.

That Phil Robertson sure can cause a stir. I have a couple thoughts on the whole thing, so let me briefly weigh in. 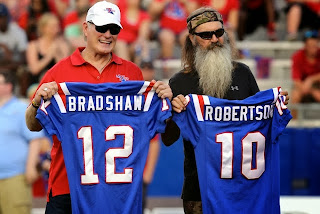 First, I think everyone should take a breath. My guess is that the Robertsons arent' too concerned about all this hullaballoo, and so maybe no one else should be either.

Second, I think we should recognize that this is NOT a first ammendment issue. Phil's right to free spreech hasn't been impinged by congress. If A&E wants to censor the content of their network, that's their call. (now, if comments like Phil's are some day deemed as official "hate speech" and he is silenced by government action; that will be a first ammendment issue)

Third, I support A&E's right to not do business with Phil Robertson based on their religious convictions.

Fourth, I expect to see consistency from organizations like GLAAD (which have spoken very strongly into this issue). I hope that they also will support the right of any American business to choose their business ventures based on their religious convictions.

For the record, I think A&E made a bad short term business decision. It will cost them millions of dollars over the next year or two. But they still hold the rights to Duck Dynasty and the majority of money they will make will be in syndication. I also think the relationship between the show and the network was already on the verge of dissolution, this just sped the process. I think A&E's decision reflects a future-minded mentality. They are posturing themselves to be acceptable to the audience they believe will be most profitable in the years to come. They don't (I don't believe) have any desire to market or pander to conservative or religious America. That's their call, and that's their right.

If you don't like the decision by A&E. Don't watch their shows or visit their sponsors. That's your right.

If you are a Christian, though. This isn't about your rights or Phil's rights. It is about what IS right. So be sure, no matter how you feel or how intense those feelings may be, take the mind of Christ.

"in humility value others above yourselves, not looking to your own interests but each of you to the interests of the others."

(those last two lines are not mine, they are from the Bible)
Email Post