5 Things We Learned From Liverpool's Thrashing of Tottenham

December 15, 2013
Forgive me for stepping outside my normal content genre and posting a bit about my favorite football team...

I had to DVR today's game, so I didn't finish it until a little bit ago. It was an absolute joy to watch. I may bask in the afterglow of this 5-0 thrashing for quite a while. From beginning to end, it was a thing of beauty to watch. 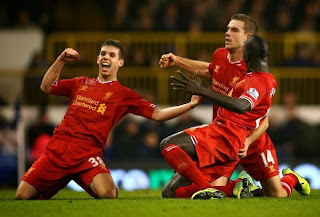 More exciting than the win, though, is the lessons which I think were learned today. Each of which bodes well for the future. Here they are:


1. These guys are good. For real. They're good. This wasn't a team fighting to avoid relegation and the game wasn't at home. This is a team playing European football, they were on their own turf, and they were well beaten (even before the deserved red card).

2. Right now, Luis Suarez is the best football player in the world. Period.

3. Ironically, an injury to Steven Gerrard, and his resulting absence, may have revealed that this could be the year Liverpool finally win the league for their beloved captain.

4. Jordan Henderson is coming of age before our eyes. He may be rightful "heir-apparent" to Gerrard's throne.

5. Raheem Sterling has arrived. He was creative, daring and unstoppable. His mark was on this game from the first moment. Most importantly, though, his physicality caused problems for Tottenham all day long. This is the Sterling we need if we are to make a run at the league championship.

I could go on. Joe Allen was splendid, Young Jon played the part of a cagey veteran. Coutinho's playmaking was scintillating. Did I mention Luis Suarez is the best footballer in the world? This I know, Brendan Rodgers is the right man for the job right now, Champion's League football seems right around the corner, they youth of Liverpool are coming of age, and more money is sure to be spent in January. It is a good day to be a Liverpool supporter.

It is a good day to not walk alone!