Jesus Led By Example. We Lead By Following.

These are the main thoughts that went out with my last "Leadership Email" to The Gathering leaders. Although the email is targeted specifically at those leading ministries and groups at The Gathering, anyone can sign up to receive the entire email at the end of the post.

In the great state of Michigan everyone knows "The Captain". He is Steve Yzerman, a Canadian hockey player who led the beloved Red Wings to multiple Stanley Cup Championships. Since Retiring, Yzerman has overseen the revitalization of Tampa Bay's hockey team, the Lightning, and was the architect responsible for building Canada's gold-medal winning team in 2010.

My son, Liam, was almost named "Stephen" in honor of Steve Yzerman's contributions to my favorite hockey team!

Despite being one of the greatest leaders in the history of hockey, Steve Yzerman is not a loud or boisterous person. In fact, he's quite soft-spoken. Yet the example he sets with the way he plays and lives has been sufficient to lead many hockey players to several championships. 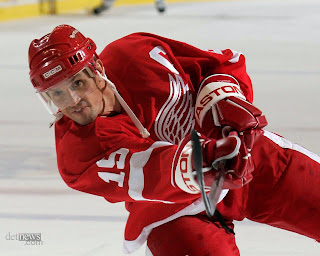 Early in his career, Yzerman was an unstoppable goal scorer. He was often mentioned in the same breath as legends like Wayne Gretzky. But his team was terrible. They were known as the "Dead Things." Then Steve Yzerman changed his game. He became a more defensive player, he stopped scoring and started creating, he began throwing himself in front of opposing player's shots (risking injury but blocking goals). His teammates caught on. The Red Wings stopped paying "pretty hockey" and started playing winning hockey. The rest is history.

The best leaders lead by example.

When confronted with throngs of people and hoards of children, Jesus modeled kindness and compassion for his disciples. After a long day in the desert, Jesus humbled himself and served his disciples by washing their feet. In the ultimate act of leading by example, Jesus sacrificed his own life for the life of his followers.

If you want to be a great leader, figure out how to set a Christ-like example in your context. Model the behavior you desire to see (especially kindness and compassion). Serve those who are following you. Above all, sacrifice your own desires and ambitions for the good of others.

The ultimate leadership example has been set for us. Now we must lead by following.