Anna’s story is found in Luke 2. Her husband died after only seven years of marriage, and she devoted the rest of her life to serving God. For as many as eighty-four years, Anna faithfully spent her days and nights at the temple praying, fasting, and teaching about God. Her faithfulness was rewarded one day near the end of her life when she was allowed to meet the child Jesus who would one day redeem her people.

What if Anna had taken that day off?

What if she had for some reason decided not to go to the temple, not to pray or fast or serve God that day?

Anna didn’t miss that day, though, because Anna had developed patterns of discipline in her life. Over all those years, she certainly would have many reasons surface to skip her daily routine, but Anna chose to stick to her spiritual disciplines through thick and thin,

Popular marketing guru Seth Godin has written a book called The Dip. Godin’s premise is that before we ever truly succeed at any major accomplishment, we must first push through “the dip”. The dip is a time of frustration, distraction, and temptation to quit. The other side of the dip, however, is success often in the form of a new skill or habit.


“Consider it pure joy, my brothers, whenever you face trials of many kinds, because you know that the testing of your faith develops perseverance. Perseverance must finish its work so that you may be mature and complete, not lacking anything.”

Our spiritual muscles are formed and developed when we are willing to push through the dip, regardless of how difficult life may be at the moment. The only way to effectively push through is by habitually disciplining ourselves.

Jerry Seinfeld is considered one of the greatest comedians in the world. When he was first beginning to work in comedy clubs he realized he needed to spend time every day writing his material. As a motivational technique, he placed a large calendar on his wall, and every day he spent time writing, he would place a large red “X” on that day’s box. Later he said about that process, “After a few days you'll have a chain. Just keep at it and the chain will grow longer every day. You'll like seeing that chain, especially when you get a few weeks under your belt. Your only job next is to not break the chain.”  Developing spiritual habits requires the same type of discipline. Don’t break the chain! 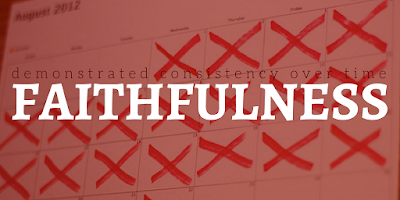 We all embrace daily disciplines in our lives. Even those who seem to be the most undisciplined people still engage in a daily habit of food. Have you ever considered why meals are such an easy discipline in which to participate? I’ve identified at least two reasons:


1) Our bodies need food to function. If we don’t eat, we shut down and die. We all desire to live, so we eat.

2) Our bodies have been conditioned to expect a certain amount of food at a certain time. If we don’t eat at our normal time, we have an internal alert system known as a stomach rumble. If we forget to eat, out body will quickly remind us.

Jesus said “Blessed are those who hunger and thirst for righteousness, for they will be filled.”

A disciplined person will have a spirit which is conditioned to expect a certain amount of spiritual food (prayer, the Bible, fellowship, etc.) at a certain time.

A disciplined person will not be able to endure if their spiritual food is withheld. Once they’ve pushed through the dip, their efforts will pay off with a new hunger and thirst for righteousness.

A fruitful life is the result of many habitual hours spent over time seeking more of God and less of me. As I discipline myself in this way, the results will begin to spill over to every area of my life.

Every day Anna spent time praying and fasting. Are you ready to start today? And continue tomorrow? Don’t break the chain!
Email Post