Your Anger is a Demonstration of What You Love

People do funny things when they are angry. They throw things and hit things and say things they will inevitably regret a short time later. I've known several "manly" men who have broken their hands, fingers and wrists because they punched a wall in anger.

Jesus once made a whip and attacked a group of store owners.

Does that mean it's okay to get angry?

In Ephesians, Paul wrote that we should be careful that in our anger we do not sin. We must never let our anger control us. Anger can be a very destructive force, and usually in the hands of humans it is a negative thing; yet Jesus' anger can actually tell us something about God's love. 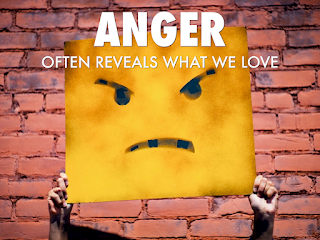 Anger is often tied directly to love. If our dog Emily eats Liam's dinner while he's not watching he may or may not get angry. If dinner was my world famous spinach, hummus, and okra casserole; Liam will not get angry with the dog. He doesn't love that dish. But if dinner is bacon and tater tots, the dog better hide because the anger is coming. Liam loves bacon and he loves tater tots.

This can be a warning to us. Sometimes our anger reveals that we love the wrong things!

God's anger is directly tied to his love for us. Sin has nasty effects. Our sin and the sin of others ruins creation (notice that we are surrounded by disease, famine, natural disasters, death, etc.). More significantly, our sin separates us from God. Therefore God is angry about our sin, because He loves his creation (us) and He desires to be reconciled to us... That's why he sent Jesus!

And Jesus' anger in the temple (in John 2) was a demonstration of God's love for us. Jesus was not angry about the selling of animals for temple worship. This practice was necessary for travelers and the poor to be able to appropriately worship in the temple.

However, Jesus WAS angry about how and where the selling was happening. Instead of providing a service for worshipers, they were getting rich by exploiting the poor. Instead of enabling worship, they were creating a distraction for the Gentiles who hoped to worship in the outer courts.

Yet, Jesus cares about the marginalized. His anger in the temple was a demonstration of His love.

This raises two simple questions for you to consider today:


1. Do you love the marginalized?

2. Do you realize that Jesus loves you?