Traffic Lessons: Responding to the Roadblocks of Life

What do you do when the road is closed?


Probably, you do none of the above. You probably take the detour.

While detours are often inconvenient, they are also very helpful. Even though we don't think of it this way, they often keep us from harm and prevent us from destroying our vehicles on roads that are not safe for driving. 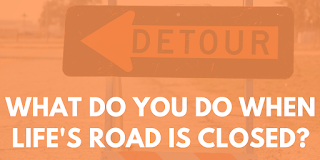 What do you do when life's road is closed?

Everyone has experienced the frustration of  a good plan stalling because of an unexpected roadblock. How do you respond when life doesn't go the direction you thought it might.


Some people, though, choose to take the detour.

Do you believe that the Bible speaks truly when it says, "No temptation has overtaken you except what is common to mankind. And God is faithful; he will not let you be tempted beyond what you can bear. But when you are tempted, he will also provide a way out so that you can endure it."?

Even if you don't know where the detour is going, you know that it will take you around the unexpected roadblock.

So next time you find yourself blocked from your planned route in life. Don't stop. Look around to see what new route God has provided and just take that first step. Let him reveal the route to you as you go.
Email Post